Literacy and play can go hand in hand. There are so many ways your child can practise learning their letters and sounds whilst having fun and even engaging in physical activity. Children don’t need to sit at a desk, in front of a TV or staring at a tablet in order to master the pre-reading and writing concepts.

Here are a few simple ideas to get your kids moving, playing and learning at the same time. 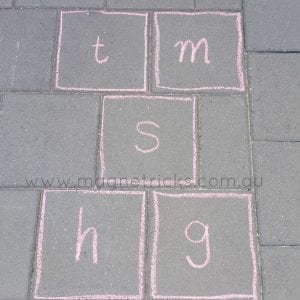 We’re lucky enough to have great pavers for hopscotch but you really can use any space. All you need is some chalk and there’s no need to worry… chalk washes off!

Write a different letter in each square, or even draw a picture if you can draw something your kids can recognise. When each child stands in each square, they can either say the letter sound, the letter name, or a word starting with that letter. Tell them which you’d like them to do and if they’re confident, get them to do all three! Once they’ve mastered these letters or if they’re having too much trouble, change the letters and keep playing. 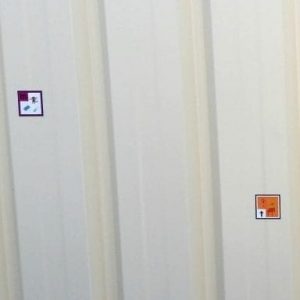 We use our backyard fence for this game as it’s metal and we can use our magnets! First you need to distribute some letters around the house or yard. Outside spaces are great because it gets your kids moving and you have a bigger area to play with.

This game can be lead by an adult or another child. They call out a letter, sound or word and everyone must race to the correct letter. This is even more fun when you have a number of children but still works with one or two especially if you keep it fast paced. Try and keep them on their feet and moving, they will giggle and get excited as well as practising their letter recognition and burning off some energy! 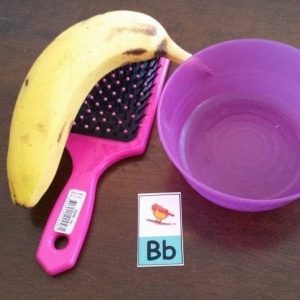 This is a fun one but it can also be quite challenging! Focus on one sound at a time and find as many things around the house as you can that start with that sound. These things can be gathered into a collection or just noted as items found.

One of the greatest things about this game is that it can be done at home, at the shops or supermarket, or out and about at parks or in the neighbourhood. 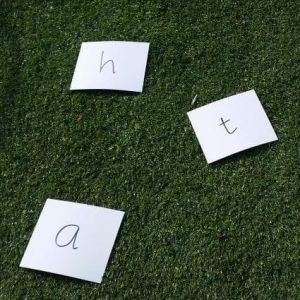 I’ve played this one many times both in the classroom at home and there are so many different ways you can be creative with it and make it fun. Sometimes we’ve done it with music, sometimes without. Sometimes with a group of children, sometimes with one or two. A really fun way to play is for the children to pretend they’re frogs and the card squares are lily-pads.

Similar to the letter race, this is a game designed to get kids up and moving. It’s also lead by an adult or another child who is responsible for calling out the letter sound, name or word. You can also call out an action like ‘hop’ and the children need to hop to the letter that hop starts with. There are so many ways you can make something like this fun, you just get to be really creative.

There are more things you can do that incorporate both literacy and play, especially table based activities, but in the interest of engaging kids in movement I really wanted to give you some ideas that make kids move. We really underestimate how important it is for our little learners to move and move regularly. Some other ideas include playing eye-spy in the car focusing on the letter sounds rather than letter name as the game is traditionally played. It’s much easier for young brains to focus on sounds first as their oral language is already there. You can also start exploring the written world when out and about. Have your child take one or two letters with them that they can search for on signs along the way or signs when you’re out and about at shopping centres.

The most important thing to make sure with all these games is that they’re having fun. Enjoying the activity is such an integral component to learning. When they’re having fun they will engage and when they’re engaged they will learn. Try to avoid pressuring your children to do it or get it right and just let them play. If they retain something from it, awesome. If they don’t, nothing has been lost especially if they have used up some energy in a healthy, happy and safe activity.

All of these game can also be applied to early number recognition which kids also love.

Spelling and grammar errors – even adults get these wrong

A letter to my emotional child